“It’s Showtime” is a new Middle School music elective this semester. Students in this class are preparing for the musical production “Seussical, Jr.” by hosting auditions, designing sets and costumes, and learning music and choreography.  The next few months will be busy with preparation for the first preview at “Night of the Arts” on April 19.  In the midst of all the planning, TCS Dad, Sam Sinns, came and spoke to the class about his career as a dancer at Disney and the steps he took to get there. TCS Mom, Alexis Kramer, also shared her love of musical theater and gave our Middle School students an example of what to expect at auditions.  Students were amazed to learn about the different places both had worked, all the behind the scenes work, and what it takes to make acting and dancing a career. 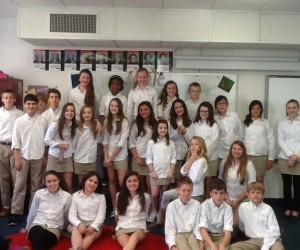